The late great Andrew Glyn always asked: “what’s the mechanism?” The west’s abject failure in Afghanistan highlights both the importance of this question and the fact that too many policy-makers and influencers fail to give it sufficient attention.

President Biden says “we did not go to Afghanistan to nation-build.” Which poses Andrew’s question: what, then, was the mechanism through which the Taliban would be defeated? We know for certain that it was not the ones actually operating: western military strategy as it was implemented failed.

Exactly why this was the case is another matter, and one not relevant for my purpose*. Instead, my point is that the failure to satisfactorily ask and answer Andrew’s question was not confined to those supporting the military adventure in Afghanistan (or Iraq, or Libya). In fact, the failure is widespread. 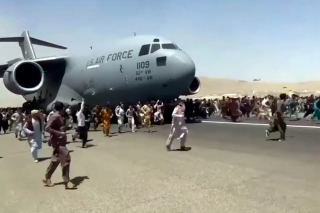 For example, Anna Soubry still defends Tory-Lib Dem fiscal austerity, even though it caused (at the margin) the Brexit she detests. She is, even now, in denial of the mechanism that led to Brexit.

And then there are those centrists and Tories who now deplore Johnson’s corruption and incompetence but who failed to prevent it in 2019 by the only means possible – supporting Labour. In the 2019 election supporting Corbyn was the only means of preventing a Johnson premiership. Not doing so was to fail to ask: what’s the mechanism?

Much of the Labour right always fails to ask: through what mechanism can Labour win power if not (as a necessary but not sufficient condition) having a mass party to combat the effect of the mass media?

This failure, though, is not confined to airhead MPs and columnists. Even Nobel laureates are guilty of it. In Deaths of Despair Angus Deaton and Anne Case, having documented how American capitalism has been a force for mass social murder, write:

Capitalism needs to be better monitored and regulated.

They omit to ask: what’s the mechanism whereby this will be accomplished? There are many obstacles to it – one of which they themselves document: the fortunes spent on lobbying by big business. Humane, well-regulated capitalism requires a particular conjunction of class forces – one in which capitalists perceive that what’s good for workers is also good for them, and in which there is countervailing power (such as strong trades unions) to the tendency for capitalism to degenerate into cronyism. This conjunction existed in the post-war decades, but no longer does so. In its absence, the better-regulated capitalism urged by Deaton is as fantastically utopian as he believes socialism to be.

What we have here, then, is a widespread error. In not asking “what’s the mechanism?” we neglect the crucial importance of ground truth and implementation – the conditions of policy success or failure. Without these, however, policy-making is mere wishful thinking. This error of course is fuelled by a media bias: windbag opinion-mongers and Westminster gossips distract policy-makers and voters from facts on the ground, mechanisms and levers of power.

Which gives us a descent into crude identity politics. If you are not asking “what is the mechanism by which we defeat the Taliban, or Johnson, or Brexit?” you are left merely asserting your moral superiority without doing the hard work of thinking, discovering ground truth and – yes – making compromises. Which leaves you with little more than narcissism.

* I know nothing at all about foreign affairs, which it seems puts me on a par with the State Department and Foreign Office.

Will A Rise in Interest Rates Lead to a New Debt Crisis?

Your Phone Could be Used to Prosecute For Getting an…

Kao The Kangaroo To Get A Fancy ‘Kaollector…

HOW TO MAKE EDIBLE SOAP WITH CHOCOLATE | SECRETS REVEALED |…