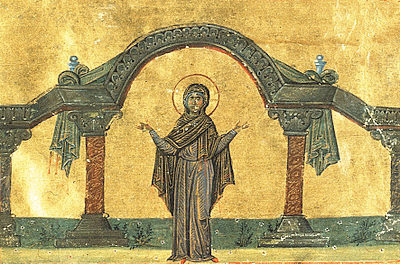 A certain holy person,–in soul admirable for virtue, in body a woman, — who was illustrious beyond all in Antioch for wealth and family and reputation, had brought up in the principles of piety her two daughters, who were now in the freshness and bloom of life. Since great envy was excited on their account, every means was used to find them in their concealment; and when it was ascertained that they were away, they were summoned deceitfully to Antioch. Thus they were caught in the nets of the soldiers. When the woman saw herself and her daughters thus helpless, and knew the things terrible to speak of that men would do to them,–and the most unbearable of all terrible things, the threatened violation of their chastity,–she exhorted herself and the maidens that they ought not to submit even to hear of this. For, she said, that to surrender their souls to the slavery of demons was worse than all deaths and destruction; and she set before them the only deliverance from all these things,–escape to Christ. They then listened to her advice. And after arranging their garments suitably, they went aside from the middle of the road, having requested of the guards a little time for retirement, and cast themselves into a river which was flowing by. Thus they destroyed themselves.

The Theological School of the Apostles

Homily One on the Holy Foremost Apostles Peter and Paul (St. Luke of Simferopol)