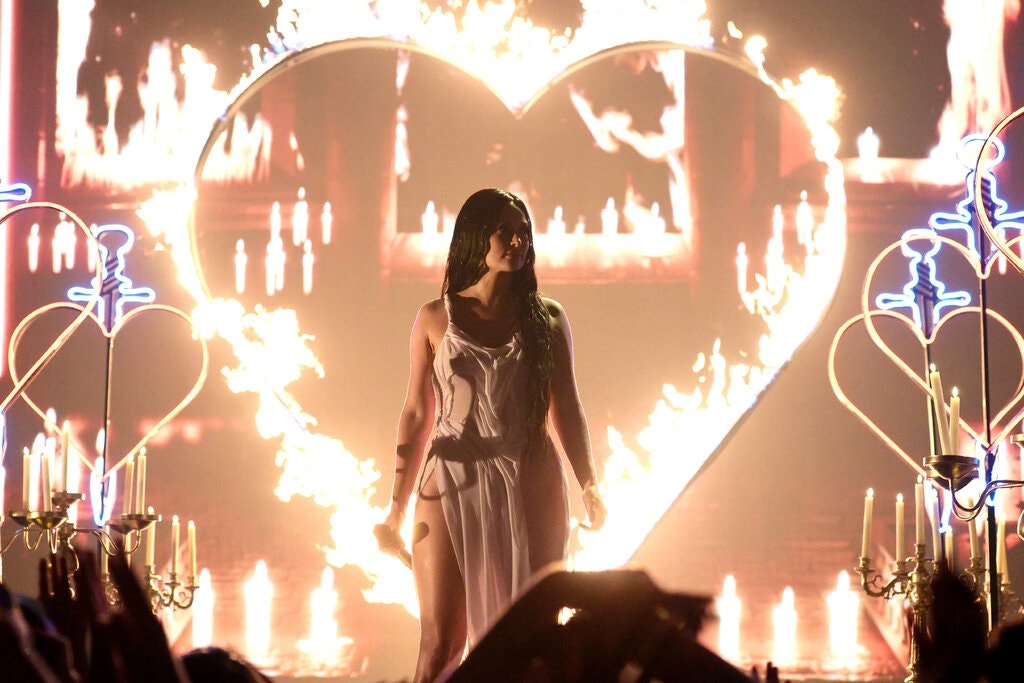 Kacey Musgraves’ fourth studio album, “Star-Crossed,” really picks up midway through, with “Breadwinner.” It’s a fun dismantling. Over pointedly plucky production, Musgraves tells a story about a male partner intimidated by a woman’s success, who latches on, vampirelike, nonetheless. “He wants your shimmer/to make him feel bigger,” Musgraves sings, “until he starts feeling insecure.”

The relationship is doomed, of course.

Musgraves pulls back later in the song to assess her own complicity, or lack thereof: “I can sleep at night knowing I really tried/I put in the time/But the fault isn’t mine.” She sings this with an unexpected sprinkle of coy, Janet Jackson-esque sweetness — a perfect smile covering up the rictus within.

“Star-Crossed” is Musgraves’ divorce album, a song cycle about how a relationship deteriorates: not all at once, or in huge shards, but decrementally. It’s full of small memories, good and bad, rendered largely without judgment.

Sometimes in breakups, there’s no pure enemy — everyone bears some culpability. Throughout “Star-Crossed,” Musgraves entertains this notion, even if only to let it ebb away. It’s a balance she strikes most astutely on “Good Wife,” on which she’s torn between thinking that title role is a worthy goal and seeing it as a tragic stock character. “Listen to his problems/Tell him that I understand/Touch him so he knows in his heart he’s the only one,” she sings, flatly declaiming the role of an attentive partner without ever sounding overly committed to it.

The first half of the album, before “Breadwinner,” is loosely about hope, particularly the hope that the relationship’s collapse may in fact be an illusion or at least stoppable. The gloomy “If This Was a Movie …” writes out a familiar fantasy of spontaneous reconciliation that’s always a red herring.

But the more potent, and affecting, part of “Star-Crossed” is its back half, when those illusions have long faded. Musgraves’ songwriting here is more detailed and therefore more savage. The curiously sweet “Hookup Scene” captures the regret of finding yourself cast out to sea after a relationship ends. The patiently sad “Camera Roll” details the modern conundrum of whether to scroll back through old photos: “Chronological order/and nothing but torture.”

Where Musgraves truly drives the nail in, though, is on “There Is a Light,” a spooky, narcotic dance floor number. A sassy flute tauntingly hovers over things, and Musgraves’ first verse begins with a vicious quatrain that captures the fracture in a nutshell:

Tried not to show it

To make you feel good

When you knew that I could

“Star-Crossed” isn’t as belabored, production-wise, as “Golden Hour,” which could feel overly woozy. (She worked with the same team here: writers and producers Daniel Tashian and Ian Fitchuk.) In places, it’s almost breezy and has a few callbacks to the light schlock of the 1970s and 1980s — the John Hughes-film gloom of “Easier Said.”

She never appears to be singing to convince you — her voice, which is modest in scale but deadly precise, connotes the power of malaise and exhaustion. It is regret embodied.

Sometimes — and often on this album — Musgraves’ resignation appears to extend to the actual act of singing itself. When she’s seething, she’s calm. When she’s calm, she’s verging on bored. Sometimes, at the end of a relationship, you’ve simply said everything there is to say. To give more would be to give too much.

This article originally appeared in The New York Times.

When Someone Finds Out You're From Massachusetts – Pahht 2