Sir Keir Starmer wants Labour to “embrace Tony Blair’s political legacy.” Which poses the question: what is that legacy?

The usual response is merely an exchange of tribal grunts: “Iraq” versus “won three elections”. The truth is more interesting.

Blair’s (and Brown’s) great genius was to see that social democracy had to adapt to new times. So, for example, his expansion of universities was a response to the increased wage inequality between graduates and non-graduates; tax credits were an attempt to tackle the prevalence of low pay caused in part by the weakness of trades unions and globalization; fiscal rules were a reaction to high real interest rates; and the granting of independence to the Bank of England represented the awareness that policy uncertainty had contributed to economic instability. 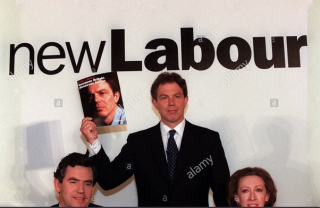 This was serious, sensible economics. And it contributed to some genuine achievements. New Labour cut child and pensioner poverty – it’s easy to forget that the latter was a big problem in the 90s – improved the NHS, and the expansion of universities helped to create a large progressive-liberal constituency.

But he also had grave faults. The biggest of these, I suspect, was his managerialism, his faith in the ability of bosses and governments to impose order from the top down. It was this that underpinned the target culture that demoralized public sector workers; the excessive deference to bosses and tolerance of the increased power and wealth of the 1%; the clampdown on migrants and benefit recipients; and the illiberalism that spawned thousands of new criminal offences.

I would argue that the Iraq war was a consequence of this. It arose from what James C. Scott has called “high modernist ideology” – too much confidence in the possibility of centralized knowledge (and the wisdom of leaders) which led to an under-valuing of ground truth.

Which brings me to why Starmer is dead right. Labour must embrace Blair’s legacy, in the sense that it must do what he did and adapt to new conditions. For example:

– In contrast to the 90s, real interest rates are now negative. This means tight fiscal policy is neither necessary nor – given the zero lower bound – desirable.

– In the 90s, Labour, like most economists, thought that a stable macroeconomic policy framework was sufficient to achieve stable economic growth. The financial crisis and subsequent productivity stagnation has shown this to be too optimistic. To promote growth, government must be more activist.

– Peter Mandelson was famously “intensely relaxed” about the very rich getting richer – a view consonant with Blair and Brown’s deference to business leaders. This can no longer be the case. It is very possible that the wealth- and power-grab of the top 1% is a cause of our poor economic performance.

– New Labour thought that education was the route to prosperity. Given the degradation of erstwhile “middle class” jobs and the unaffordability of housing, this is now doubtful.

– We have learned that there are limits what bosses and top-down management can do. New Labour’s excessive faith in these contributed to stagnant (pdf) public sector productivity and the financial crisis: bosses, it turned out, could stop banks going bust.

My personal view is that answers to these issues should entail more democratisation of economic life. But that’s not my main point. It is instead that we should embrace Blair’s legacy by addressing the question he asked and answered: “what does a modern social democracy look like?” He rejected the idea that Labour could live in the world as it was twenty years previously. We should follow him in that rejection. In this sense, Blair had a wisdom which is wholly missing in his epigones.

Reparations. Is it finally time? | Best of #TheBlackTable w/…