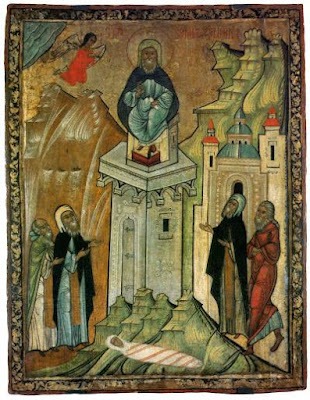 Near Antioch, under the mountain by the road, a blind old man was sitting during the barbarian invasion and begged for alms from passers-by. And when the barbarians unexpectedly attacked, one of them struck the old man on the neck with a sword and inflicted a fatal wound on him. The old man was rolling in his blood, with little life in him. And Saint Symeon, seeing all this with his transparent vision, sent several monks to bring him that old man. The monks went, laid the old man on the mat and brought him under the pillar. The Saint took the dust from the ground, moistened it with consecrated water, and ordered them to put it on the old man’s wound, saying: “In the name of Emmanuel, let this head cling to its place and hold together.” Immediately the old man’s head stuck in its place, the veins grew together, the head became stronger, the terrible wounds disappeared, and the old man spoke. Then his blind eyes opened. And all who saw it were terrified and glorified God.

Theatre as Laboratory: Exploring the Fabric of Humanity with…

BREAKING HAPPENING👈LIVE IN IRLAND AS BIAFRANS GIVE ANOTHER…

Diana Jenkins RHOBH to be FIRED! Lisa Rinna windmills for…