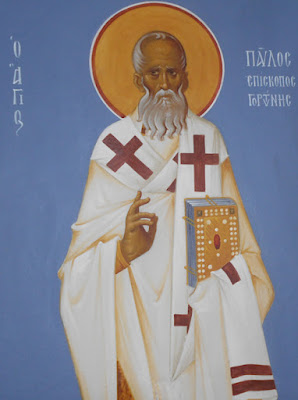 Saint Paul was Bishop of Gortyna towards the end of the Great Persecution against the Christians and led his flock when the Christians obtained new freedoms under Emperor Constantine the Great. In the year 312, after Constantine had a vision of the Holy Cross in the sky, Bishop Paul went to Rome with the emperor and asked for his permission to have the Ten Martyrs of Crete who were martyred under Decius in 250. When he returned to Crete, he went to the place where they were buried called Alonia, along with other Christians, some of whom were advanced in years and remembered what these Martyrs suffered 62 years earlier. Their names were saved until the middle of the 6th century, when the relevant Martyrion was written that records this event, that is, 200 years later, and they were commemorated annually on the feast of the Ten Martyrs. Unfortunately, these names are not saved today. When the holy relics of the Ten Martyrs were uncovered, they were found by Saint Paul to be incorrupt, and he had them transferred to the city of Gortyna, where they were celebrated for centuries, as well as throughout Crete. Saint Paul of Gortyna is commemorated locally on the first Sunday of October.

Teachers Behaving Badly: Here's why hundreds of Massachusetts' teachers have lost their licenses

When Mysterious Creatures Are Caught on Live TV

Deborah Sampson: A Woman In The Continental Army | Short…