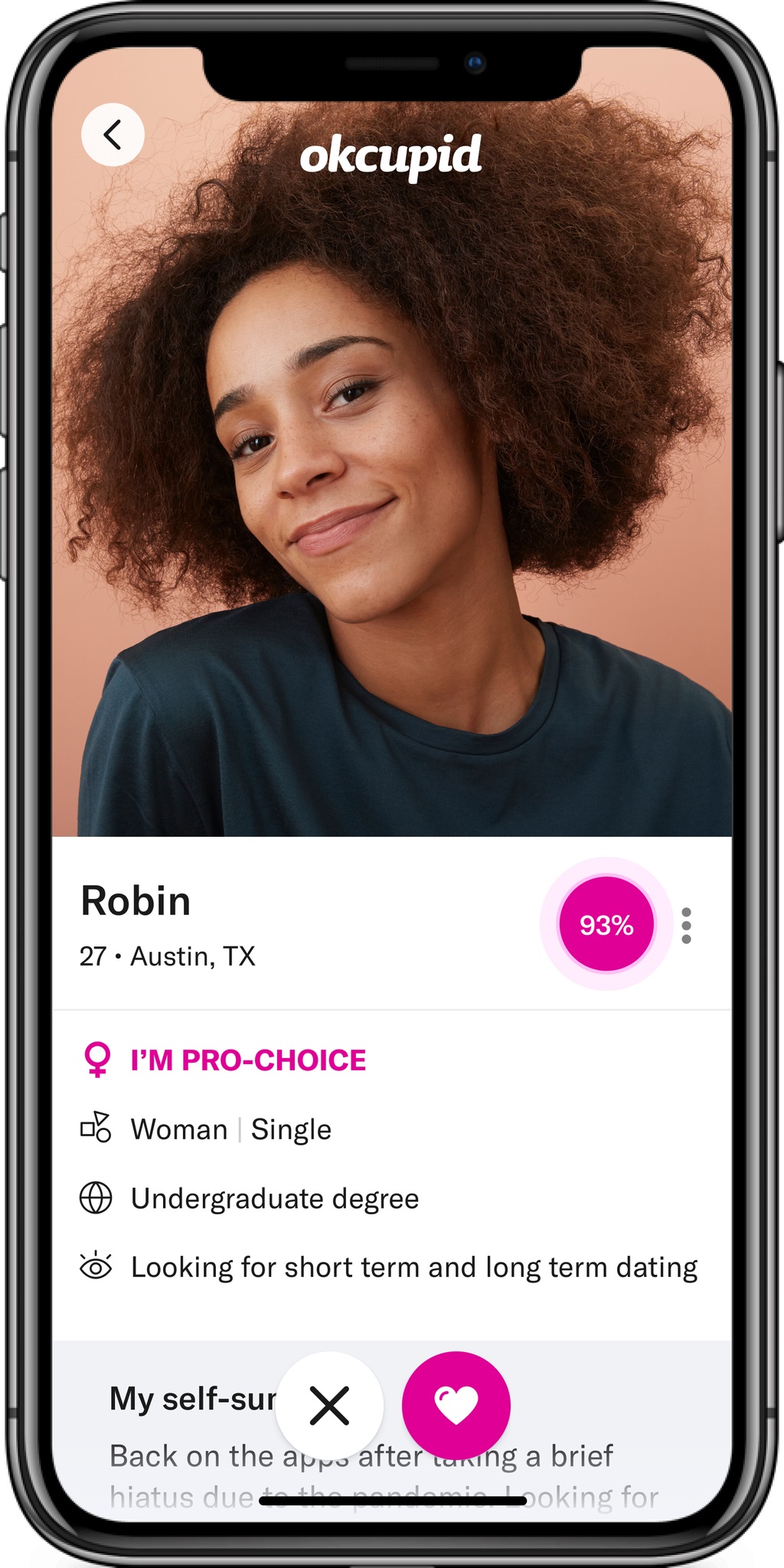 The dating service OKCupid has introduced a way for users to clearly indicate their support of abortion rights: a “pro-choice” badge that appears prominently in a dating profile.

Melissa Hobley, OKCupid’s chief marketing officer, said the feature was created in response to the passage of Senate Bill 8, which has made abortion essentially illegal in Texas. (OKCupid’s parent company, Match Group, is headquartered in Dallas.)

The badge, comparable to a virtual bumper sticker, will appear on profiles directly below biographical details — such as name, age and location — making it immediately visible to anyone who’s swiping. For every profile that adds the badge, OKCupid will donate $1 to Planned Parenthood.

In recent years, OKCupid has offered users different badges to signal their stance on various political issues, including a “Black Lives Matter” badge and a “Voter” badge. In May, the company added an “I’m Vaccinated” badge to its slate of identifiers.

OKCupid’s abortion-rights badge was developed after the Supreme Court decided in early September not to block the Texas law that bans most abortions after six weeks and allows citizens to sue anyone who helps a patient receive an abortion. Signaling support of abortion rights was already gaining purchase with OKCupid users: Between September 2020 and September 2021, the number of U.S. users who wrote “pro-choice” in their bios increased by about 18%, the company said.

Sarah Lynn Robinson, 30, a dating coach, was one of them. After Senate Bill 8 became law, she added a line to her OKCupid bio: “pro-woman, pro-choice, those in disagreement can see themselves out.”

“I’m friends with some people who are a little more conservative than I am, or religious and on the fence about abortion, and that’s all fine,” Robinson said by phone. “But I think your partner is the one person in your life who should uphold the same standards and morals. I would rather be single for the rest of my life than be with a guy who doesn’t support my right to bodily autonomy.”

More and more, dating apps are enabling users to incorporate their political views into their profiles. Bumble offers a filter that sorts people based on their politics, such as whether they consider themselves conservative or liberal. In a survey, the company found that politics is in the top 10 out of 50 factors that women consider in a potential match.

Before such features arrived, people on the apps were already creating their own slogans and visual shorthand to express their political beliefs. The red rose emoji, for instance, could be used to indicate one’s affiliation with the Democratic Socialists of America, while a red hat in a profile photo might signal one’s support of former President Donald Trump.

Younger millennials and members of Gen Z have been particularly supportive of the idea that a woman should be able to have an abortion, according to a Gallup poll. They are also the generations most likely to use dating apps.

Making one’s views clear can improve the odds of making a connection, according to OKCupid. People who include “pro-choice” in their OKCupid profiles are almost twice as likely to get a reply than others. (The likelihood of a reply also increased for profiles with a Voter badge.)

Beyond the badge, Match Group announced in early September that it was creating a fund to help employees and dependents affected by the abortion law.

Bumble, which is based in Austin, Texas, made a similar move, saying the company created a “a relief fund supporting the reproductive rights of women and people across the gender spectrum who seek abortions in Texas.”

This article originally appeared in https://www.nytimes.com/2021/09/20/style/okcupid-abortion-rights-badge.html The New York Times.

Hopeful Thinking: Communion of the Spirit

'Best team in the NBA': Celtics fans ready for…

How On Earth Did The Man In The Yellow Hat Get Monkeypox?

CDC wants Americans to be aware of the monkeypox virus and…

Impossible Relics From The Great Flood 🌊