Interview With Metropolitan Athanasios of Limassol on Issues Concerning the Pandemic, Vaccination, His Personal Battle With the Coronavirus, and his Stance on Ukraine 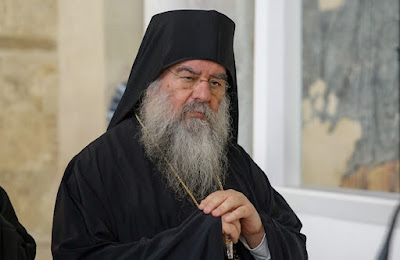 The following interview was conducted by philenews.com with Metropolitan Athanasios of Limassol. Having recently suffered with the coronavirus, the interviewer asks him a series of controversial questions regarding this issue, and being one of the Hierarchs of Cyprus who disagreed with how the Archbishop of Cyprus handled the issue of Ukraine, he clarifies his stance.

You got sick in March 2021 with the coronavirus. How did you experience the adventure?

Thank God, it was an adventure that passed. At the moment I was walking in the unknown, I did not know what would happen because I also have some underlying diseases. I was scared but then I left it in the hands of God. I said my prayer and asked God to do His will.

You were also hospitalized for a few days.

The doctors told me to do that when I was informed that I was infected with the virus. I was told you have to go to the hospital. Their order was imperative because I might not have gone since I was not feeling bad at the time. Fortunately I went early.

Were you afraid you might not return? What were your thoughts?

When I got on the stretcher, and the door closed and the ambulance started rushing, I said it was over, I am leaving the city, I will come back dead. I said, fine, whatever is God’s will, let it be done.

I am human, I will have an end to the present life like everyone else. When I went to the hospital I was calm and quiet. With a lot of love, respect and care, doctors and nurses treated me and so I felt I was in good hands.

One and a half years later has your view of the pandemic changed?

At first no one knew exactly how this disease would develope and what it is. They have definitely clarified things, we know what we are dealing with. It has been a year and a half before us that we have this range. It worries us, it saddens us, it makes it difficult for us, but we are more familiar with dealing with it.

Did the pandemic cause a discord of opinions between the Hierarchs and the Holy Synod?

No, I would not say discord. Bishops are people too who are informed, educated and have their opinions. It is not obligatory for us to be in agreement and we should not all have the same opinion. What will be the meaning of a Synod when everyone necessarily has the same opinion?

This is the image, however, that came out.

Unfortunately, it came out wrong. Bishops who have had or now have a different opinion are respected people and we respect their views. They have their arguments.

We are not scientists, we are not biologists or chemists, pharmacists or doctors to know how to deal with or decide scientifically about drugs and vaccines.

We listen to what experts say. But surely there are some other equally serious and important scientists who have the opposite view.

The Archbishop has called on you several times to comply and some to even restrict their public positions.

The Holy Synod clarified and we all agreed on that, that it will be neither for nor against. That is, it will not force a person to be vaccinated.

It urges people to get vaccinated, but it does not force it. Now, whether the Archbishop or some other Metropolitan has taken a different position, I think that the decision of the Synod prevails.

We want to maintain love between people, because unfortunately there is a discord, a fanaticism. We became like fans of soccer teams, hooligans.

Does this happen in the Synod as well?

No, it does not happen. In the Synod there is a spirit of dialogue which is very good.

To those on the outside, however, this is the image that is portrayed.

Yes, it is portrayed like that, I do not know why. I did not see anything like that. We all spoke very well and very accurately, and the Archbishop and the fathers said we will not pressure anyone.

Have you been vaccinated?

I will not answer publicly whether I was vaccinated or not, because I do not want to influence anyone with my own attitude. If I say that I was vaccinated, those who got the vaccine will be strengthened, but if not, the opposite will happen and then I will be the subject of various comments.

I tried to talk to some of the two factions, but unfortunately I found that there is bigotry. I am not an expert to be able to answer, I cannot have arguments.

I am a priest, a shepherd and I will answer theologically and spiritually. As far as I know and I have studied, there is no theological problem with it, beyond that let people do what they think.

There are some who believe that with the vaccine they receive the antichrist.

I do not believe this and I try to persuade them not to say such things. I do not think there is such a danger, but there are people who are not convinced. However there are also Hierarchs who have this view.

Have the priests been vaccinated in the Metropolis of Limassol?

Almost everyone is vaccinated. There is a small portion that has not been vaccinated. It is their choice and I cannot ask the others whether they were vaccinated or not.

Do you think that as a State we have mishandled the issue of vaccination?

We made panic moves. We did not spend enough time convincing people through scientific analysis and dialogue with citizens.

There are hierarchs who are against vaccination. Do you think that they know anything more?

Some who are against the vaccine have studied a lot. Others have done the same.

I cannot say that the hierarchs or other scientists who are against the vaccine are frivolous people, no. They have serious arguments but I cannot know them, I cannot evaluate them.

The hierarchs who are against may seek to rally around a certain portion of citizens?

I do not think that is the case. They are just people of this ideology. But some fanaticism is created. This is the sad thing, families are divided, employers with employees and people are stigmatized.

What is your relationship today with the Archbishop?

My relationship is very good with the Primate, I have not clashed with him at all. I respect, love and appreciate him. He is a great man, he also has health problems, we pray that God has him well.

You do not co-liturgize with him though …

I did not participate on the day of the Apostle Barnabas because it was optional to co-liturgize. It’s not that I had a reason to do so. I will do it at the first opportunity and we will liturgize together.

The work of your Metropolis?

(The Metropolitan was also asked about the work of the Metropolis, however he did not want to comment, saying that he does not like to advertise his work.

It should be noted that the Sacred Metropolis of Limassol performs one of the largest charitable works in the city, supporting hundreds of needy fellow citizens and students.

The Metropolis of Limassol has 170 priests, 150 parishes and 10 monasteries. Apart from the Greek Cypriot priests, there are several Romanians, Russians, Arabs and Georgians.)

A big issue was created in the Holy Synod with the commemoration of Metropolitan Epiphany as Primate of Ukraine by the Archbishop. What is your opinion?

I disagree with the recognition of Epiphany as a canonical Primate of Ukraine for reasons mentioned in the Holy Canons. I have set forth my point of view and position.

Besides this, I can do nothing else. I disagreed with the Archbishop because without informing the Holy Synod, he commemorated Epiphany. He told us afterwards, “To my own knowledge I did it, I did not want to inform others”, so he did it, and it was over.

Did the issue bother you personally?

I do not know either the one Metropolitan or the other. Nor do I have any personal relationship with Onufry or Epiphany. On the contrary, we have a very good relationship with the Ecumenical Patriarch, and I revere and love and respect him and his contribution to us has always been very important. It was a matter of conscience, a matter of observing the sacred canons of the Church.

Was there a violation of these Sacred Canons?

In my opinion, yes. In the view of the Ecumenical Patriarch, no. We look forward to seeing how things turn out over the years.

Is there a so-called schism in the Holy Synod after the commemoration by the Archbishop?

I disagree, I say my opinion, it is recorded in the minutes of the Holy Synod and we move on. We eat with the Archbishop every time in the Synod, we talk, we joke, as normal people.

However, it came out that there is this schism in the Church of Cyprus. These are published for consumption!

Only four Autocephalous Churches, with ours among them, recognized Epiphany, while the other ten did not do so. For what reason?

The Holy Canons provide for a procedure for this issue and on the other hand there is another dimension: to divide the Church into Greeks and Slavs and this should never be done.

We Greeks should not be separated from the other brothers. The Church is above racial discrimination.

Are you afraid of such a schism?

I think not, because it is very well managed by the Prelates.

Second Homily for the Sunday of the Samaritan Woman (St. Luke of Simferopol)

Lawmakers debate if college sports should be in betting bill

Applied History: Season 3; Episode 1 – An Intro to Our…