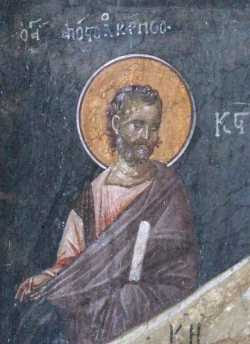 The Holy Apostle Carpos, one of the Seventy Apostles, was a companion and servant of the Holy Apostle Paul; he distributed his epistles to those for whom they were intended. Striving much with the Apostle Paul in preaching the gospel of Christ, Saint Carpos suffered many temptations. He was then appointed Bishop of the city of Beroea in Thrace by the Apostle Paul. Saint Carpos also made an effort to preach the gospel of Christ on the island of Crete. There he received Saint Dionysius the Areopagite into his home. There he also saw the Lord who appeared to him in a vision, when Carpos begged Him to punish two sinners, and he heard the voice of the Lord saying to him: “Strike me, because I am ready to be crucified again for the salvation of men.”

Saint Dionysius the Areopagite testifies about Saint Carpos and the fact that he never undertook the celebration of the Pure and Life-giving Mysteries unless he had previously had a divine vision from heaven. Saint Dionysius the Areopagite speaks with great praise of the Apostle Carpos. In his epistle to the monk Demophilos, he says about Saint Carpos: “This man was great in his virtues and was characterized by such a sublime purity of the nous that he possessed a great ability to see God.”

As Bishop of Beroea, Saint Carpos converted many pagans to Christ God. By rebuking the Jews, he convinced some of them to believe that Christ, when they crucified Him, was the true God and Creator of all things. But because of that, the other Jews cruelly and ruthlessly tortured and killed him, and he surrendered his soul into the hands of the Lord. His honorable relics were buried by God-fearing Christians in that same city, and they gave healings to many sick people to the glory of Christ our God.

From Lives of the Saints. Translation by John Sanidopoulos.