In the year 2000, the Russian Orthodox Church canonized one hundred and four priests and monks who were arrested and convicted for their faith in the year 1937, in the Ukrainian city of Cherkasy. Many of them were shot, others did not return from the camps. From the documents it is clear that often sentences were handed down to people who had not yet been arrested. Church historians from Cherkasy cite only one case of the return of a clergyman from the camp.

In the 1920s, the first massive wave of repression against clergy and believers swept across the country. At that time there were still relatively few death sentences. After five or seven years of exile, many received an order forbidding them to live in large cities such as Moscow, Leningrad, Kyiv, Kharkov. Therefore, many exiled priests and monks moved to small towns such as Cherkasy. The census of the thirty-seventh year in the country showed that two-thirds of the citizens continued to call themselves believers. On December 5, 1936, the USSR adopted the Constitution, which declared freedom of conscience, equality of rights for all citizens, universal, equal and direct elections by secret ballot… People were optimistic.

Almost immediately, in January 1937, the authorities conducted a population census, which, in particular, showed that 2/3 of the population of the USSR (75%) were believers. In villages in the Cherkasy region, the number of believers reached 80% (for example, in the village of Verguny). On Easter in 1937, which coincided with the May Day holidays, people went to churches en masse and not to clubs, confessed in church and took communion, and did not demonstrate solidarity. The authorities were literally in shock: 20 years had passed since the revolution, a huge hellish work had been done to destroy the Church, of which as many temples remained in the gigantic country as there were in one small province before the revolution, and people still believed! On May 20, 1937, Malenkov submitted a note to Stalin, which began with the words: “It is known that that recently the hostile activity of the clergymen has seriously revived.” It served as an ideological basis for the repressions of 37-38. On July 30, 1937, an Operational Order was issued, which ordered mass repressions to be carried out within a four-month period (from August 5 to the end of the year). By order of Yezhov, the country was divided into operational sectors, with certain military and police units. But Cherkassy did not need this, the 58th NKVD rifle division was stationed there. At that time, 136,900 Orthodox clergy were arrested throughout the country, of which 85,300 people were shot. In the Cherkasy region, they could not cope with the plan. Until the end of the 1937, (at least) 138 meetings of the Judicial Troikas of the NKVD were held. It is documented, that on December 31, death sentences were passed on people who had not even been arrested yet, that is, charges against whom had not yet been brought. These people were arrested by Christmas, and shot a week later. There is evidence from the investigator of the Cherkassy district NKVD that the investigators were fake. For the execution of the accused, at least the testimony of three witnesses was required. In a hurry, the investigators invented statements.

There are cases when priests died during interrogations, as happened with Konstantin (Dyakov), Metropolitan of Kyiv, who died as a martyr during interrogation on the night of November 10, 1937, and according to documents he was shot later, in 1938. Together with the Orthodox clergy, Renovationists were also shot in the region, according to the documents we see that one Old Believer bishop and one Catholic were shot.

Many later said about the God-fighting time that then everyone was afraid of everything.

Archival documents show: not everyone and not everything. Former novice of the Moshnogorsk Holy Ascension Monastery Panteleimon Kovalenko, born in 1899, on the night of December 11-12 (1937) compiled and distributed leaflets in the village of Geronimovka with the aim of disrupting the elections to the Supreme Soviet of the USSR, – this was recorded in the Indictment. The archive contains three notebooks of his poems, there are lines:

I am the one who declares war on Satan:
I want to beat Stalin!
I do not want the Jewish kingdom.
I’m going to meet the sword.

Together with Panteleimon Kovalenko, Vasily Savchenko, born in 1908 (he was not even thirty), was arrested, who was anti-Soviet, a churchman and, being closely associated with Kovalenko, forbade his family to take part in voting at a polling station, carrying out similar work among the population under type of religious belief. Unfortunately, the leaflet itself is not in the file, it was sent to Kyiv. They were arrested on January 12, sentenced to death on the 25th, executed on January 14, 1938.

This day was the day of the mass executions in Cherkasy, the authorities were in a hurry to report by the New Year, even according to the old style. In 1938, more than 28,000 Orthodox clergymen were arrested and 21,500 were shot. We know nothing about the fate of many after they were sentenced to serving their sentences in labor camps (ITL). According to the documents, we see that a person was sentenced to 10 years in a labor camp, and his trace is lost. 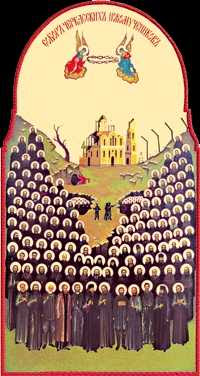 The Cherkasy region knows only one case of the return of a clergyman from the camps. Now we know him as Schema-Archimandrite Avvakum (Starov, baptized Dimitri, a native of the village of Verguna). He is the last rector of the last operating monastery in the Cherkasy region – Moshnogorsky Holy Ascension. The monastery was closed by the authorities at the end of 1923 or at the beginning of 1924. Abba Avvakum is the last elder of the land of Cherkasy. He was born on October 25 (November 7), 1877. In 1917 he turned 40 years old. He survived arrests, camps, a terrible disease.

According to the testimony of people who knew him, he was a great elder who had spiritual children all over the world. Father Avvakum knew, for example, in advance that in 1961 new persecutions against the Church would begin, churches would be destroyed and monasteries would be closed. Literally by a miracle, Vladyka Sophrony (Archbishop of Cherkasy and Kanevsky) found information about Father Avvakum, whom he was looking for as Father Dosithea – the elder bore this name until the secret adoption of the schema. Miraculously, the place of his rest was also found: in 1964 Father Avvakum was buried at Cherkasy Vatutinskoye (Nativity of the Theotokos Cemetery); he lived for 87 years. Elder Avvakum has not yet been canonized, but believers venerate him as a holy confessor.

So far, the names of one hundred and four new martyrs from Cherkasy have been established. The collection of materials continues.

Theatre as Laboratory: Exploring the Fabric of Humanity with…

BREAKING HAPPENING👈LIVE IN IRLAND AS BIAFRANS GIVE ANOTHER…

Diana Jenkins RHOBH to be FIRED! Lisa Rinna windmills for…