Galatians 2:20 in Light of the Fathers of the “Philokalia” 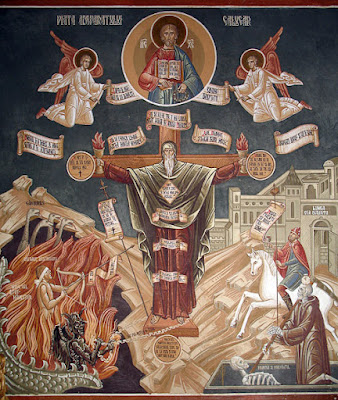 “I have been crucified with Christ; it is no longer I who live, but Christ who lives in me; and the life I now live in the flesh I live by faith in the Son of God, who loved me and gave himself for me.”

74. He who yokes the practice of the virtues to spiritual knowledge is a skillful farmer, watering the fields of his soul from two pure springs. For the spring of spiritual knowledge raises the immature soul to the contemplation of higher realities; while the spring of ascetic practice mortifies our earthly members: ‘unchastity, uncleanness, passion, evil desire’ (Col. 3:5). Once these are dead, the virtues come into flower and bear the fruits of the Spirit: ‘love, joy, peace, long-suffering, kindness, goodness, faith, gentleness, self-control’ (Gal. 5:22-23). And then this prudent farmer, having ‘crucified the flesh together with the passions and desires’ (Gal. 5:24), will say together with St Paul: ‘I no longer live, but Christ lives in me; and the life I now live … I live through faith in the Son of God, who loved me and gave Himself for me’ (Gal. 2:20).

(A Century of Spiritual Texts)

92. The kingdom of God the Father is present in all believers in potentiality; it is present in actuality in those who, after totally expelling all natural life of soul and body from their inner state, have attained the life of the Spirit alone and are able to say, ‘I no longer live, but Christ lives in me’ (Gal. 2:20).

59. The holy Gospel teaches men to reject life according to the flesh and to embrace life according to the Spirit. I am speaking of those who are always dying to what is human – I mean human life in the flesh according to this present age – and living for God in the Spirit alone, after the example of St Paul and his followers. They do not in any way live their own life but have Christ living in them in the soul alone (cf. Gal. 2:20). Those, then, who in this age are truly dead to the flesh can be distinguished in this way: even though they suffer much affliction, torment, distress and persecution, and experience innumerable forms of trial and temptation, nevertheless they bear everything with joy.

and Virtue and Vice First Century)

and Virtue and Vice Fifth Century)

20. You who sacrifice God’s flesh and share in it through holy communion should also be united to Him by dying the death that He died (cf. Rom. 6:5). As St Paul says (cf. Gal. 2:20), you should live, not for yourself, but for Him who was crucified and died on your behalf. If, dominated by passion, you live for the flesh and the world, prepare yourself for deathless punishment through death unless you resign of your own accord from your priesthood before you die. But many unworthy priests have been snatched away by sudden death and sent to the halls of judgment.

(On the Practice of the Virtues,

Contemplation and the Priesthood)

39. You will not be worthy of divine love unless you possess spiritual knowledge, or of spiritual knowledge unless you possess faith. I do not mean faith of a theoretical kind, but that which we acquire as a result of practicing the virtues. You will achieve true compunction only when through self-control and vigil, prayer and humility, you have withered the propensity to sensual pleasure congenital to the flesh and have been crucified with Christ (cf. Gal. 2:19-20), no longer living the life of the passions but living and walking in the Spirit, filled with the hope of heavenly glory.

(On the Practice of the Virtues,

Contemplation and the Priesthood)

16. A man still subject to physical impulses has not yet been crucified with Christ (cf. Gal. 2:20), and if he still drags natural thoughts along with him he has not yet been buried with Him. How then can he be raised up with Christ, to live in newness of life?

74. If you have been raised above dead actions you are resurrected with Christ. And if you are resurrected with Christ through spiritual knowledge, and Christ no longer dies, then you will not be overcome by the death of ignorance. For the death which you have now died to sin, prompted by an impulse in accordance with nature, you have died once for all; but the life you now live you live in God through the freedom of the Holy Spirit, who has raised you above the dead actions of sin (cf. Rom. 6:9-11). Thus you will no longer live according to the flesh, in a fallen worldly state, for you will have died to the mortal members of your body and to worldly matters. On the contrary, Christ will live in you (cf. Gal. 2:20), for you will be guided by the grace of the Holy Spirit, not enslaved to the law of your outer unregenerate self; and your members will be weapons of righteousness consecrated to God the Father (cf. Rom. 6:13).

(On Spiritual Knowledge, Love and

the Perfection of Living: One Hundred Texts)

The Priest Who Constantly Laughed During Confession

Saint Kyriakos of Evrychou and the Child With Brain Cancer

'Best team in the NBA': Celtics fans ready for…

How On Earth Did The Man In The Yellow Hat Get Monkeypox?

CDC wants Americans to be aware of the monkeypox virus and…

Impossible Relics From The Great Flood 🌊