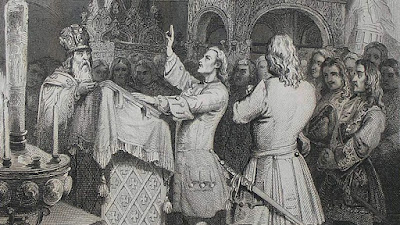 …continued from part one.

Let us look very briefly at some very erroneous historical steps that have gradually provoked a genetic mentality of bigotry and fueled expansionist tactics in our Russian brothers.

The Russians took the autocephaly by blackmailing (almost imprisoning) the then Ecumenical Patriarch for a year, in times of suffering of the Mother Church. This is the first big error of their ecclesiastical history. We had a test of power and coercion of the daughter against the Mother Church. And this error the self-appointed judges do not want to admit publicly.

Peter the Great, who at one time was in Holland, took from there the religious standards of organization and transported them to Russia. He defined a way of governing that resembled Protestant standards. The changes of Peter the Great were extended by his granddaughter Elizabeth. In Russia, the Patriarchate was abolished, and the Synodal administration was inaugurated, that is, a structure of religious power which is supposedly more participatory (Protestant), which, however, evolves into something highly centralized (Papist). A mutated small and appointed “Synodal pattern” is introduced that is not reminiscent of an Orthodox Synod, but of Protestant participation, mutated into Papal strict centralism. [Today the Russian Permanent Synod has 15 Members, 10 permanent and 5 alternating, from a very large number of Hierarchs. Understand what is happening, when at any time the Bishops are obligatorily transferred and upgraded from seat to seat … Metropolitan Tikhon Shevkunov from Vicar of the Moscow province was transferred in May 2018 to the distant Pskov, because he was considered a fan of moderation towards the Ecumenical Patriarchate].

This Russian model of administration was taken from the Bavarian regency and imposed on Greece in 1833, wanting to cut off free Greece from the Ecumenical Patriarchate and, of course, to control the religion of modern Greece.

On top of the administrative alteration of centralism in the Russian Church there was later added the Russian bigotry. The second evil was greater than the first. The fall of Adam in a new edition. The aberration into a worldly delusion of grandeur! The Bishops of the appointed small Permanent Synod also become at some point instruments of State policy. And from them passes the Tsarist policy to all the Bishops. All Bishops are obliged to follow the absolute power of the Russian Synod and the strict national policy of the State. They become something like “Deputy Ministers of Internal and Foreign Policy”. We have a gradual secularization of criteria. Eventually, the great Russian imperial idea passes as an idea to the Russian Church. The Russian Church becomes (also) an instrument of Russian domestic and foreign policy.

This mindset is maintained to this day. Without a Pan-Orthodox decision, as an absolute beneficiary, Russia extends itself to declarations of autonomy e.g. in Moldavia, in Belarus, in Ukraine, it spreads to exarchates in America, establishing an autonomous local Church filtered with the toxicity of nationalism that no other Church has recognized both in Europe and the Far East. On the other hand, it is spreading even faster today (yes, today) with steps of conquest in Jerusalem, in Africa, in Cyprus and elsewhere, with an aggressive foreign practice of the Russians. It is a contempt for the mystery of Christ.

The Theological School of the Apostles

Homily One on the Holy Foremost Apostles Peter and Paul (St. Luke of Simferopol)