Dragon’s Dogma Is A Janky, Weird, Ageing RPG, And Everyone Should Play It


Dragon’s Dogma: Dark Arisen turned 10 years old this week, and to celebrate, Kate’s been reminiscing about her first time playing it, and her love for Grocco…

In fact, from the very beginning of Dragon’s Dogma, you’re a knight, tasked with killing a dragon. So far, so RPG, right? But that’s just the prelude, because you’re actually some random villager who gets their heart stolen by a dragon after the prelude is over. Who was that knight? Don’t worry about it! You are now the Arisen, because anyone who can survive having their heart ripped out by a scaly monster must be important. What’s your role as the Arisen? DON’T. WORRY. ABOUT. IT.

You’re quickly shunted off into the wilderness, in the company of your pawn — a sort-of-human, sort-of-AI sidekick who will help you fight the various enemies and creatures that threaten your life outside of the safety of your village. You get to design this pawn from scratch, from their hair colour to the pitch of their voice, which is surprisingly unusual in video games.

It’s the pawn system that people tend to love most about Dragon’s Dogma, and I am inclined to agree. On the surface, having an NPC with you on your journey seems like a tiresome escort mission combined with nearly-useless AI combat help, but what your pawns end up being — you can have up to three at any time, created by you or borrowed from other players — is a mixture between your steadfast companions, your best friends on a roadtrip, and your sweet, idiot children. You can dress them up, tell them how to behave in battle, equip them with good gear, and send them out into the world to be hired by other players. They’ll even give you hints while you’re on quests or fighting monsters, based on their own experience.

To be honest, Dragon’s Dogma really drags for the first few hours, and I don’t blame people for not getting past that hump. Your pawns won’t shut up about really basic things, giving you tips about low-level enemies over, and over, and over again, and constantly saying things like “Wolves hunt in packs!” and “They’re armed, Master!” with all the helpfulness of a GPS telling you to make a U-turn as soon as possible. There’s not much in the way of a tutorial, and the combat system doesn’t open up properly until quite far in.

But once you’ve got a few talented pawns, a grip on the combat, and a few thousand XP in your pocket, Dragon’s Dogma becomes a much more exciting experience. It turns from a “stab the man until he dies” game into a test of how many completely overpowered spells and attacks you can use one after the other, spamming massive damage moves until the griffin you’re fighting explodes.

I’m not sure why I kept going past the rubbish start of Dragon’s Dogma to get to the delicious meat inside, because my patience is usually quite limited with things like that — but I’m glad I did, because it’s much more than it looks on paper. It’s more than it looks in general, too. It looks old. It’s got that janky Skyrimmy NPC business going on, where everyone zooms in when they’re talking to you, and their faces all look smooth like a peeled potato. All the best pawns you can download are dressed like clowns, with names like “CRUNKUS THE BUM-SLAYER”, which makes it a bit embarrassing to add them to your party. And did I mention that they never shut up?

But somehow, all those janky parts come together to make an incredibly fun whole. Raise them right, and your pawns will become far more powerful than your main character, and you’ll be content to just stand back and watch while they slice an entire horde of zombies into undead ribbons. And then, like eager-to-please puppies, they’ll yell a bunch of things like “I’ve got this one!” and “let me take him!” — there’s no other co-op system like it, partly because your pawns are endlessly entertaining.

They routinely open chests that you were about to open, or run over to smash a crate that you were in the middle of smashing, under the guise of being helpful

Pawns are, in fact, the perfect solution to the co-op problem. You don’t have to have a group of willing friends, or perfectly-synced-up schedules; you also don’t have to babysit a bunch of useless AI companions with a deathwish.

With just a little training, your pawns become incredibly capable, and they’re a unique mixture of personal bodyguards, D&D entourage, and Data from Star Trek, chiming in with their thoughts whenever the feeling takes them. Sometimes it’s helpful. Sometimes they’ll just yell OGRES when there’s no such threat around. They routinely open chests that you were about to open, or run over to smash a crate that you were in the middle of smashing, under the guise of being helpful. I love them. 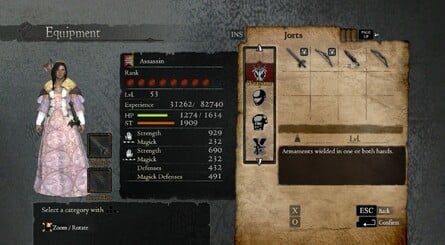 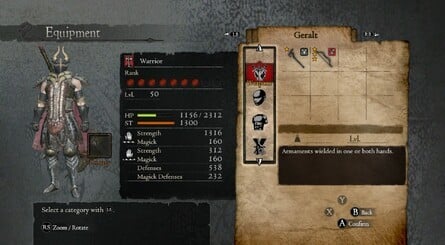 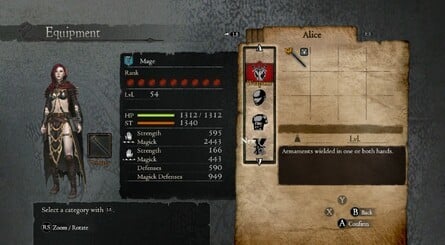 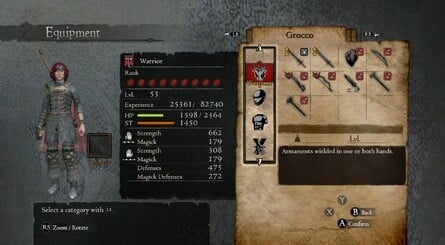 My party consists of: Jorts, my main character, a badass rogue/ranger who’s always wearing a robe and tiara because those are the outfits that came with the DLC and they’re much more powerful than anything else in the game; Geralt, a heavily-armoured lad I downloaded whose main ability is to die every few seconds; Alice, my healer, who is very much into the “chainmail bikini” genre of fashion; and… Grocco.

Darling Grocco. He’s the pawn I created at the start of the game, and much like that one overlevelled bird that you take to the Elite Four in the Pokémon games because you’re really attached to him, Grocco has been with me all this time. I’m oddly sentimental about Grocco. He’s got a helium-high voice, which means that his warnings to “watch out, master” are made even better by the fact that he sounds like a chipmunk. He’s also tiny.

Grocco began life as a bit of a liability, like being forced to take a toddler camping with you. He kept rushing into battles he was ill-prepared for, dying repeatedly and forcing me to carry his stupid unconscious body with me to safety. But by the end of the game, he was braver, more powerful, and MUCH smarter than me, constantly coming up with wise tips like “’tis not defeat to run from battle, master. ‘Tis survival.”

Every now and again, we’ll sit down at the “Knowledge Chair”, which is how the game handles your pawn’s combat settings. It’s a touchingly human way to do it, because it means sitting opposite dear Grocco while he asks me if he’s doing a good job in battle, and if I would like him to talk less. No, Grocco. Never change.

I don’t want to spoil the really cool parts of the story that happen later on, because I think Dragon’s Dogma holds up well enough that you should play it, but safe to say that it goes places, and if you’re one of the people that saved your dog instead of humanity at the end of Fable 2, you’ll probably love this, too. Don’t be afraid to seek help from the internet on how to get through the tricky bits, or how the confusing inventory and class systems work; and don’t be ashamed to hire some beefy pawns from the Rift. Lean into the weird, earnest goofiness of the game. Learn to love your Grocco.

Are you a Dragon’s Dogma fan? Tell me about your pawn!

Fall Guys Gets An Update, Here Are The Full Patch Notes

Did YOU know these famous people were born in…