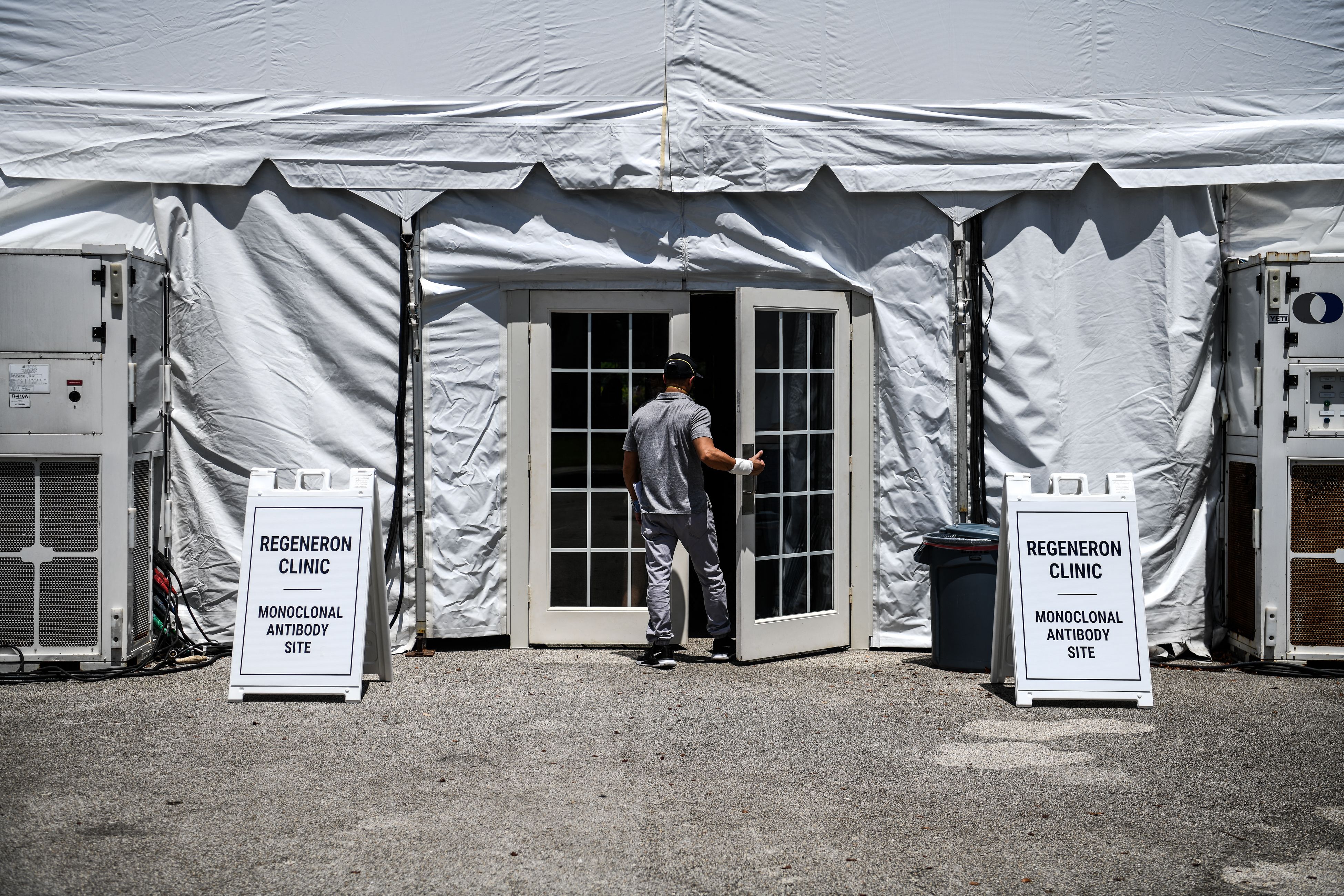 As COVID deaths continue to spike across the U.S.—primarily among unvaccinated populations—newly developed treatments for the disease are again receiving attention. Monoclonal antibody (mAb) therapies are among the most effective. In this treatment, patients are infused with high concentrations of antibodies specifically engineered to fight SARS-CoV-2, the virus that causes COVID.

These treatments have been particularly popular in states such as Florida, which has high numbers of unvaccinated people and has been suffering a major outbreak of the Delta variant since August. Governor Ron DeSantis, who has been dismissive of COVID vaccines as a personal choice without broader impact on society has nevertheless touted mAbs, calling them “the best thing we can do to reduce the number of people who require hospitalization.” Health officials argue that vaccination is a better way to avoid the need for these treatments in the first place. But mAbs are indeed effective when delivered early in an infection.

Florida has rolled out more than 20 nonclinical infusion centers—including libraries, theaters and churches—to administer mAbs to people who either have COVID or have been recently exposed to someone who does. Even so, public health workers have had trouble keeping up with demand—one viral photograph taken in late August shows a woman sick with COVID lying on the floor of the Jacksonville Library while awaiting a mAb injection. DeSantis said that more than 90,000 people have received the treatment as of September 16.

Scientific American talked with several experts about mAbs and how they fit into the fight against COVID.

What are monoclonal antibodies, and how do they work?

MAbs have long been used to treat diseases such as cancer and autoimmune disorders—the U.S. Food and Drug Administration has approved nearly 100 such treatments since 1994. To create them, researchers inject a protein—part of SARS-CoV-2, for instance—into a mouse and then collect some of its immune cells that create antibodies against the protein. These cells are then fused with human cancer cells and allowed to multiply so that the specific antibodies can be made at scale and infused into patients. Many mAbs for COVID seem to work best as a “cocktail” of antibodies that each target different parts of the virus.

The approved COVID mAbs appear to be most effective when given right after a person begins showing symptoms. “That’s the time window in which the virus itself is playing a bigger role, before it triggers the inflammatory complications,” says Brandon Webb, an infectious disease physician at Intermountain Healthcare in Utah. If a patient’s immune system overreacts to the infection and requires artificial ventilation because of inflammatory damage to the lungs, the antibodies appear much less effective—and may even be harmful.

What antibodies are available?

Right now, three mAb treatments that target SARS-CoV-2 are available under an FDA emergency use authorization (EUA), which allows a treatment to be used in certain people but stops short of full approval. An antibody called sotrovimab, made by GlaxoSmithKline and Vir, appears to reduce the risk that people infected with COVID will be hospitalized for more than a day or die by 79 percent. A two-antibody cocktail from Regeneron called casirivimab/imdevimab appears similarly effective, reducing the risk of hospitalization and death by 70 percent.

The FDA approved a third cocktail—Eli Lilly’s bamlanivimab/etesevimab—in 2020, but the agency recommended against its use earlier this year after it appeared to be ineffective against new viral variants such as Delta. After a two-month hiatus, the cocktail is back on the market as of August 27 but only in states where fewer than 5 percent of COVID infections are from strains, such as Delta, that are resistant to the treatment.

In June the FDA authorized a fourth cocktail, Genentech’s tocilizumab, for people already hospitalized with COVID. Unlike the other therapies, which target SARS-CoV-2 itself, tocilizumab targets a signaling molecule that can cause the immune system to overreact and produce dangerous levels of inflammation. Back in 2010 the FDA approved tocilizumab for rheumatoid arthritis. It is only moderately effective against COVID, however: studies show that 12 percent of patients receiving the mAb required ventilation or died, compared with 19 percent of those receiving a placebo.

Who can get mAbs?

The antibodies from Eli Lilly, Regeneron, and GlaxoSmithKline and Vir are approved for children age 12 and older and adults who have not been hospitalized, whereas Genentech’s antibodies are for children and adults who are already on ventilators. But not everyone can get the treatments right now: the EUAs stipulate that patients must be at high risk of complications from COVID in order to receive them. That includes people age 65 and older and those with conditions such as obesity, diabetes and cardiovascular disease.

In August the FDA authorized Regeneron’s mAb for people who meet these risk criteria and have been exposed to COVID but have not yet tested positive.

What does the treatment entail?

In a clinical setting, mAbs are administered as an intravenous infusion—similar to a chemotherapy treatment—that lasts about 20 minutes. The Regeneron cocktail can also be injected under the skin. That is the preferred method at pop-up sites and nonclinical settings where intravenous infusions are difficult, says Susanne Doblecki-Lewis, an infectious disease physician at the University of Miami. In the injection method, four shots are given simultaneously, typically two in the arms and two in the stomach.

After administering the mAb treatment, clinics monitor patients for one hour for rare allergic reactions. Other side effects include hypersensitivity, rashes and diarrhea. While patients do not need to pay for the mAb cocktail itself, some clinics bill for the infusion, which requires skilled health care workers and specific equipment to administer.

Are mAb treatments a substitute for vaccination?

Both Webb and Doblecki-Lewis stress that mAb treatment is no substitute for vaccination. “Unfortunately, the vaccine has become so political that some people would prefer monoclonal antibodies because of the way they’re being promoted,” Doblecki-Lewis says. But the vaccines have fewer side effects, are cheaper and more widely available, and are much easier to administer. “The vaccine is just so clearly a better step one,” she says.

Vaccinated people with breakthrough COVID infections can get mAb treatments if they meet the EUA criteria. That includes people who are immunocompromised and thus unlikely to have had a strong immune response to the vaccine. Conversely, though, some evidence suggests that getting mAb treatment before getting the vaccine lowers the latter’s ability to raise an immune response because the body already has high levels of antibodies against SARS-CoV-2. That is why the U.S. Centers for Disease Control and Prevention recommends that unvaccinated people who receive mAb treatment wait 90 days before receiving their first vaccine. But they should still get vaccinated, Webb says. “It’s unrealistic to think we could treat our way out of this pandemic,” he adds.

Zarude Arrives In Pokémon GO This Week, Here’s How To Get One

Extraterrestrials and the Search for Life

'Dances of Spring' performance at Springfield…