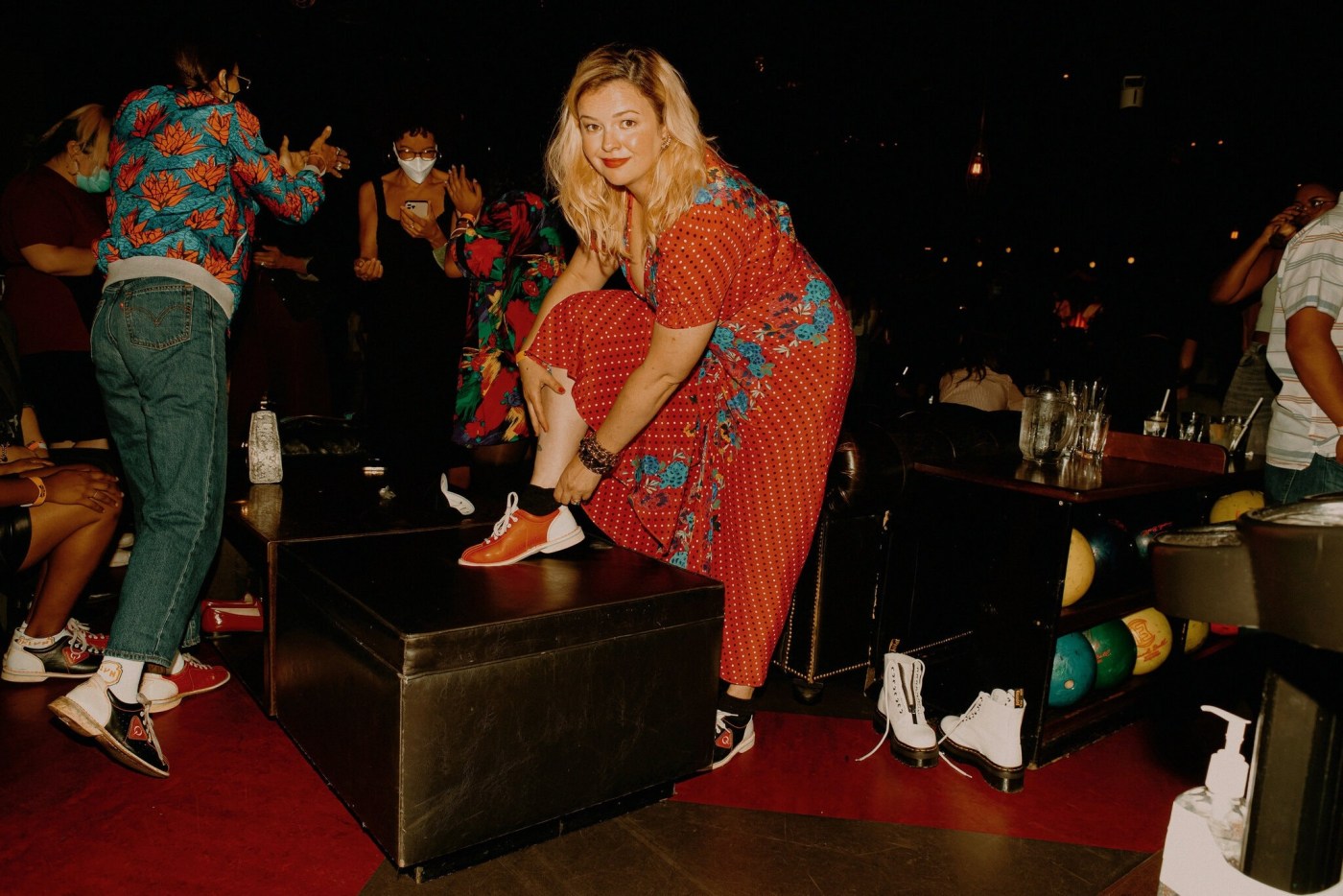 NEW YORK — Amber Tamblyn strode confidently toward the foul line and unleashed a sparkly pink bowling ball toward the waiting pins. Almost immediately, the ball plopped into the right gutter. Another ball, another assured approach. That ball guttered, too.

But Tamblyn, 38, an actor, director, poet, novelist, essayist and activist, didn’t much care about her score.

“Win or lose, I’ll always be happy at the Bowl when Ahmir is DJ’ing,” she said on a recent Thursday night at Brooklyn Bowl.

She was referring to Ahmir Thompson, better known as Questlove, a frontman of the Roots. A longtime friend, he was the DJ for Tamblyn’s 2012 wedding to comedian David Cross. Whenever Questlove hosts Bowl Train, an evening of vintage soul at Brooklyn Bowl, Tamblyn shows up, ready to lace up some freshly disinfected footwear and grind the dance floor.

She had dressed to grind, in a perilously low-cut dress, blood-red lipstick and gently waved blond hair.

Over a pregame Negroni at Le Crocodile, the restaurant at the nearby Wythe Hotel, she puckered for a selfie and texted it to Cross. “I’m literally flirting with my husband,” she said. “Thirteen years, I still got it.” Then, as midnight approached, she ran across the street to meet a group of friends.

The group was almost exclusively female (one husband tagged along), which offered a more cheerful echo of Tamblyn’s current project, “Y: The Last Man.” Based on the post-apocalyptic DC Comics series by Brian Vaughan and Pia Guerra, “Y” imagines a world in which almost everyone with a Y chromosome dies abruptly. Instead of the hair-braiding feminist utopia this may summon, society devolves into near anarchy and brutal conflict.

“It’s kind of like ‘Lord of the Flies’ with ladies,” Tamblyn said of the series, now streaming on FX on Hulu.

Stoking that conflict is Tamblyn’s character, Kimberly, the daughter of the recently deceased Republican president, a “boy mom” with a flawless updo who has always defined herself by proximity to male power.

An activist and a co-founder of Time’s Up, Tamblyn practices progressive politics. This makes Kimberly, which Tamblyn described as “the Walter White of white feminism” and “the Joker,” something of a departure from the relatable women she has played in works such as “Joan of Arcadia” and “The Sisterhood of the Traveling Pants.”

Even though Tamblyn had gracefully transitioned from child star (“General Hospital”) to adult actor with flame intact, she told herself that if she were to return to acting, she would take on only roles that challenged her. Kimberly provided that challenge.

“As a woman who is almost 40 and who feels extremely liberated and free, I cannot think of anything more exciting to explore than another woman’s liberation,” Tamblyn said.

At Brooklyn Bowl, she encircled herself with her liberated friends. They subbed out their footwear for bowling shoes and made their way to the lane where Tamblyn ordered for everybody. She switched to bourbon on the rocks and hefted a couple of balls for size.

Size didn’t matter. In her third round, a ball guttered on the left side for a change. “That was better,” Tamblyn said.

With the Jackson 5 playing, several of her friends provided pointers. Paola Mendoza, a founder of the Women’s March, noticed that she was twisting her wrist and told her to imagine shaking someone’s hand.

That also seemed like good life advice, as did “Don’t be afraid to use your strength,” which hasn’t been a problem for Tamblyn.

Still, Tamblyn must have listened. She downed six pins on her next turn and then dropped toward the floor, twerking in celebration. She finished that first game with a floor-grazing 38.

When the game ended, Tamblyn turned to dancing, which she did with gusto, sometimes with chicken in hand. She danced with her friends and without them, executing a few moves atop the black couch that faced the line.

“I deeply missed nights like this over the last year when everything felt so terrifying, and my body just wanted to get free,” Tamblyn said. At 2 a.m., after another game in which she very nearly managed a spare, she rode home — liberated, free and with the leftover fried chicken tucked into a napkin.

This article originally appeared in The New York Times.